Logos are undoubtably the face of a brand, but they aren’t the only piece of marketing at a brand’s disposal. When it comes to telling a story, one of the most effective ways to do so is through advertisements. Whether a company decides that the best way to reach their customers is through web ads, newspaper and magazine ads, or television, each can be used effectively if the focus is on communicating the brand’s message.

While I was at PrideSports and working on redesigning, recreating and expanding the Black Widow brand, we determined that one of the most advantageous ways for us to reach our customers was through advertising in various golf magazines. Magazines are great because, for the most part, they have already segmented the audience down to your core consumers. If you want to speak directly to magazine readers who are golfers, then golf magazines are where you want to be. Since golf consumers were absolutely who we were reaching out to, we began putting together a campaign that first introduced the new Black Widow grips, and second illustrated their bold design to the customer. 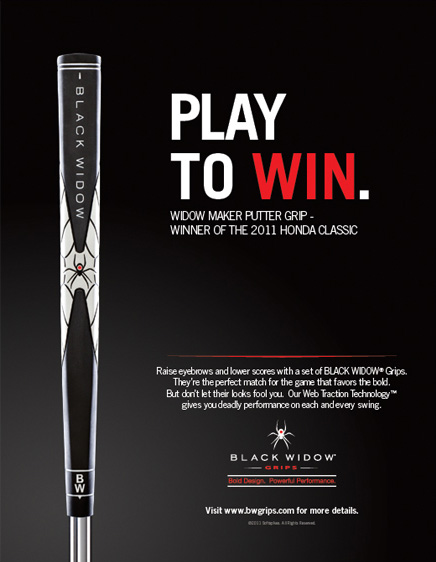 One of my favorite ads from this campaign was this advertisement from 2011. The headline of the ad is Play to Win. Simple, to the point, and it helps to illustrate the intention of (nearly) every golfer. They’re all out there to win. The winning golfer of the Honda Classic that year was using a Black Widow grip on his club, and we were able to use the headline and sub-head to give a straight-forward “here’s what we can do” to the consumer.

From a design standpoint, emphasizing “WIN” with red further drives home the idea that the brand has the potential to deliver on performance. Combining this point of emphasis, with simple photography, a clean-cut sans-serif font, and a bold black background, we were able to establish a design that conveyed what we were looking for. We were looking for a way to tell the story of the Black Widow brand and our design capitalized on intentional simplicity and boldness to deliver.